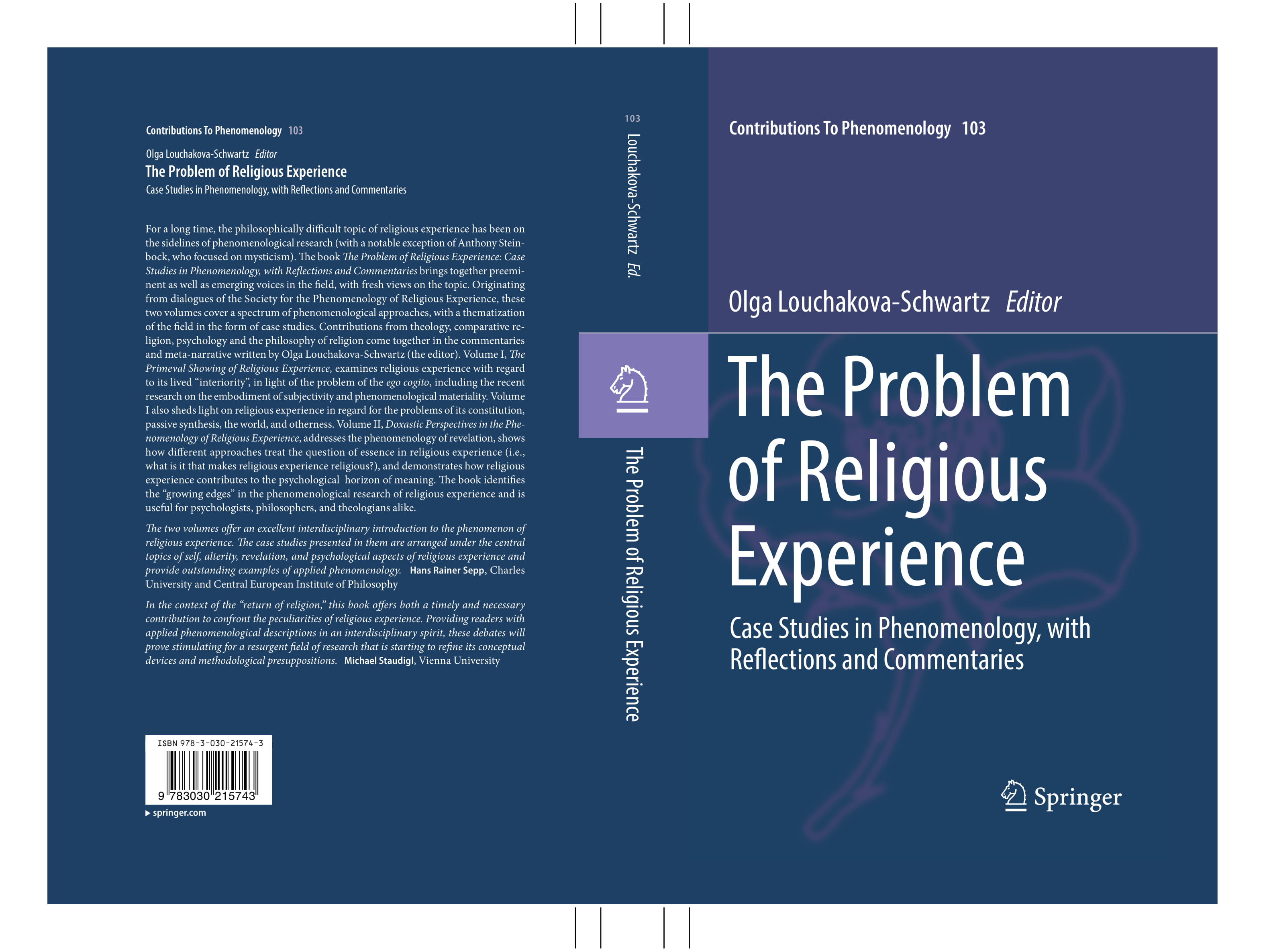 Thematization, thematization…. This is all I seem to have been doing for the last three years, after the Fall 2016, when, on the heels of the first conference “Phenomenology of Religious Experience” in Berkeley, it was decided to start a separate standing academic society under the same name.   The idea of “the phenomenology of religious experience” has been in the air for a while, and it is fair to say it incarnated simultaneously in several heads. Pretty soon we discovered that having a society also means getting organized – an ongoing process reminding one of fractals, strange attractors, and the growth of barnacles on a dock.  In the phenomenology of religious experience, “organized” means “thematized”:  the phenomenology of religious experience is supposed to be an applied field, but the protean nature of experience termed “religious” insulated the latter from systematic ἐποχή and critical thematization. Hence, the work of the Society so far has been a bit like harvesting amidst crop circles:  the input both from seasoned and new researchers is rich, yet interrupted by peculiar gaps in intellectual “crowdsourcing”.

For example, the topic of our second conference (2018, Jesuit School of Theology in Berkeley) was announced as “Religious Experience and Lifeworld”, in hope that we would tap exactly into yet unorganized knowledge as to how religious experience participates in the constitution of the natural attitude which renders our world exactly as it appears sans scientific metaphysics.  Plenty of wonderful talks and the intellectual graciousness of Mike Barber,  Tanya Luhrmann, Kristóf Oltvai, and Neal DeRoo got us a very stimulating, interesting two days of discussions, except for the original intended topic swiftly dissolved into an ocean of new, unorganized findings. Fortunately, Open Theology (De Gruyter), a journal with which we “hit it off” in terms of intellectual chemistry, gave us space to improvise. The second post-conference issue sprouted into two issues, Perspectives in Theology (ed. Olga Louchakova-Schwartz and Martin Nitsche), https://sophere.org/publications/open-theology-2018/, and Imagination, Visuality, and Lifeworld (ed. Martin Nitsche and Olga Louchakova-Schwartz, forthcoming). The last issue includes some papers from the end of the 2018 conference in Prague, a plenary congress generously hosted by the Institute of Philosophy of the Czech Academy of Science, c/o Martin Nitsche.

By the time of our now being on the fourth issue of Open Theology with the topic “Religious Experience and Description”, it has became a habit to issue calls for papers which span the range of topics from purely theoretical, i.e., in transcendental or generative phenomenology, to concreteness of, e.g., literary studies or ecology. Then, we analyze the emergent themes and condense analysis into an overarching summary in the Introductions to the issues. The two volumes of the forthcoming with Springer works of the Society, the outcome of a similar “crowdsourcing” around the very first conference at the Patriarch Athenagoras Institute in Berkeley, follow the same strategy in the thematization of the volumes.  One of my mentors, Anna-Teresa Tymieniecka, used the same strategy of “crowdsourcing” the Logos in her unforgettable, eclectic, at times freakily careless  and thereby beautiful collection of Analecta  Husserliana; yet another analogy is sohbet, the Arabo-Turkish term for a hermeneutic group dialogue technique (in Islam)  intended to explicate the truth of the matter under investigation.

My own interest in religious experience comes not from a religious or metaphysical commitment, but from many years of frustrated attempts to make sense out of the massive evidence of  first and second person lived-through perceptions which are usually qualified as religious or spiritual. In the 1980s, while an M.D. turned neuroscientist, I became a teacher in what was then the spiritual underground in Soviet Russia and Eastern Europe. I believe that the scene of this was like nothing else in history: on the heels of an attempt to radically and ideologically secularize a whole of society and instead of the “opium for the masses” (Marxist term for religion), give the former the overarching idea of a human development towards absolute realization of all kinds of “potential”, there erupted a massive grass roots proliferation of groups focused on religious experiencing.  A colleague of mine and I were the first to describe this  phenomenon , in Kungurtsev, I. & Louchakova, O. 1994. “The unknown Russian mysticism: Pagan sorcery, Christian yoga, and other esoteric practices in the former Soviet Union”. Gnosis, 32, 20-27. Reprint: (1997). In communication with Eastern Orthodox scholars in the USA after 1992, I often heard an opinion that the tradition continued uninterrupted by the years of the Soviet Power. If so, this continuity was very well hidden if not clandestine, and did not reach the “masses”. The eclectic, grass roots spirituality did. It had to stay underground though; people were put in prison or badly hurt in other ways if they came out with such “ideological attack” on the powers in charge. But a need to stay underground created intense, focused forms of practice, such as variations on the theme of Tibetan yoga tummo, cave retreats  etc. Of course, absorption, concentration and prayer bring up experiences of a religious kind. This was the only way religiosity or spirituality could have been taught, i.e. via intentionally, methodically, systematically cultivated experience.  Somewhat analogous to the entheogen movement in the West with regard to the interest in God-experience, this movement was different, no drugs but completely contemplation oriented.  Psychedelic drugs have been simply unavailable or restricted in the former Soviet bloc.

A decade later, in the1990s, while already teaching in the US, I attempted to find some means of researching religious or spiritual experience—and nothing fit. One could certainly do some testing or EEG correlations,  or skim the surface with qualitative methods, but the very essence of what is religious in such studies was lost. Thus, my introduction to phenomenology was mainly pragmatic,  in hunger for methodology, but it quickly grew into a real addiction to philosophy and phenomenological research. Now, after study of The Crisis, Logical Investigations, Experience and Judgement and other major phenomenological works,  I truly hope that it will be possible to give religious forms of experience the place they “scientifically” deserve,  as something which pushes the knowledge of consciousness and person beyond the red tape of traditional thematization by sciences.